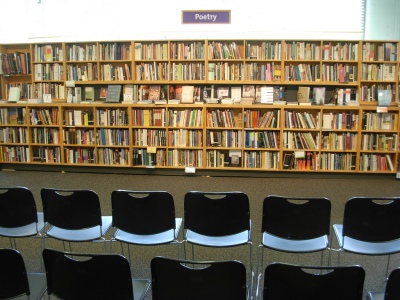 God’s sake, don’t write a sonnet! What’s the point?
That boy you like will still be fully dressed,
And other poets still be unimpressed
(In fact, their noses may go out of joint).

Feeling is first! Form’s just an afterthought,
And rhyming’s unforgiving work at best,
When every single line feels like a test.
So, should you write a sonnet? You should not.

Oh, Petrarch, Shakespeare, had their vogue, it’s true,
But really, fourteen lines is awfully long.
Best get in — cut the middle — finish strong.
Who wants a sonnet? You should write haiku.

Trust me, I’ve thought this through and through: put down the pen.
The sonnet’s day is gone, and will not come again.

Image: Waiting for Poetry Reading? University of Washington Bookstore, by Flickr user J.Brew, published under a Creative Commons Attribution-ShareAlike 2.0 Generic (CC BY-SA 2.0) license. The image’s deeper meaning is left as an exercise for the reader.

… an offering for today’s prompt from napowrimo.net, “to write a poem that addresses itself or some aspect of its self.”

2 thoughts on “Sonnet: Against Sonnets”