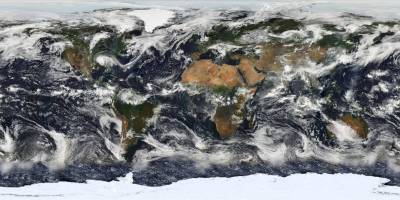 Image: “Main Terra“, image credited to NASA, which informs us:

This image is based largely on observations from the Moderate Resolution Imaging Spectroradiometer (MODIS) – a sensor aboard the Terra Satellite – on July 11, 2005. Small gaps in MODIS’ coverage between overpasses, as well as Antarctica (which is in polar darkness in July), have been filled in using GOES weather satellites and the latest version of the NASA Blue Marble.)

As a U.S. government work, this image is unprotected by copyright.