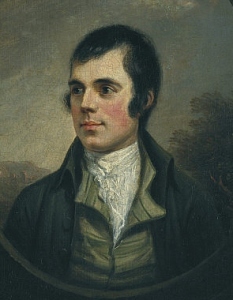 The Bard of Ayrshire, Robert Burns,
His verses take some riddling turns:
E.g., to judge by his Epistle, whosom-
ever’s winsome’s also loosome.

Image: Portrait of Robert Burns (detail) (1787) by the Scottish painter Alexander Nasmyth; this image is unprotected by copyright because seriously, come on, even Walt Disney couldn’t get Congress to protect something this old.

“Loosome” is really (really it is!) an English word, at least in the sense that more than one native speaker of English has written it down on purpose. Burns’s instance appears in the ponderously-titled “Extempore epistle to Mr McAdam of Craigengillan.” Despite this pedigree, the Oxford English Dictionary inexplicably provides “loosome” only as a mere exemplar of the “real” word “lovesome,” which is simply insulting. The OED defines loosome (okay, fine, “lovesome”) as meaning “Worthy of love; having qualities that inspire love; lovable”; winsome as, roughly, “Pleasant, delightful, agreeable.” So I’m’a say they’re close enough for a clerihew.

A tip o’ th’ cap to James Harbeck, whose whimsical wonderment at the word “winsome” drove me to look up “loosome.”