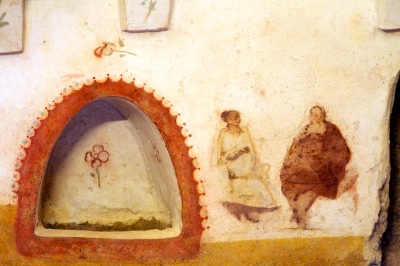 Most get an afterlife that isn’t much
for having had one’s soul pried out and kissed by death.
Oh, yes, it’s heady for a while, everyone suddenly
so sympathetic to one’s finished life,
so seeking lessons from one’s progress, or
so plucking-out-the-moral from one’s last decline.

It’s not bad while it lasts,
and everyone makes nice, but honestly
it’s mostly straight from gravestones and condolence cards:
“Beloved mother, Loving wife,” and how
she loved her kids, her husband, animals,
was pleasant always, liked to dance…

Most dead folk get that taste of it.
But later, after the tepid food and drives back home,
after some hours or months of reminisce,
one’s absences become less notable; one starts to fade.
And then what’s left of one? A nice obit, scrapbooked;
a stray memorial card stuck in a dresser drawer somewhere.

But this!
If there’s a heaven, oh! She’s gloating there for sure,
knowing she’s in it for the long haul now;
the mortification of her outraged privacy
is nothing to such pride! Such an I-knew-it!
Her own death, the source of his triumph!

Image: Afterlife, photo of a wall in a necropolis unearthed on Via Portuense, 1951. Dated from about the first half of the 2nd century AD. Museo Nazionale Romano, Terme di Diocleziano, Rome. This photo was taken by Flickr user Nick Thompson, and published under a Creative Commons  Attribution-NonCommercial-ShareAlike 2.0 Generic (CC BY-NC-SA 2.0) license.