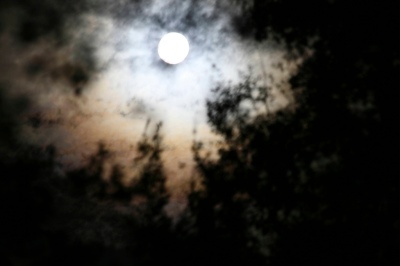 I gazed into my wine cup
Till after darkness fell.

Out of that dark pool
The vines grew up
Twining me around
And the wine was in me
And I was the wine.

Then I dreamed I stood,
Lost in the wine’s dreaming,
And the moon was there
Beneath my feet, there
Where I walked, midstream.

But nobody was there
To wake me.

This is, again, inspired by one of Li Po‘s poems. I hesitate to claim it as a translation; perhaps, speaking loosely, an adaptation. The title of the original is variously translated into English as “Amusing Myself” or “I sat drinking” or “Wine“; so much for legitimate translation, I suppose.

At any rate, here, courtesy of chinese-poems.com, is (I am informed and believe) Li Po’s original:

… and a word-by-word transliteration:

Image: new moon by Ed Schipul, published under a Creative Commons  Attribution-ShareAlike 2.0 Generic (CC BY-SA 2.0) license; The Moon’s Invention (by Tsukioka Yoshitoshi, from his series 100 Aspects of the Moon (Tsuki hyakushi), published between 1885 and 1892; this work is out of copyright in the United States. And yes, I am aware that Li Po lived in China, Yoshitoshi in Japan. But come on.

5 thoughts on “I gazed into my wine cup”