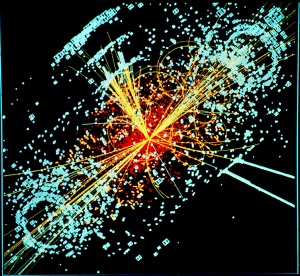 Edna St. Vincent Millay
Was heard on occasion to say
That only the author of Euclid’s Elements
Had ever seen Beauty without habiliments.

One supposes she meant to imply that people who do maths
Have taken quite the best of all available paths
And that study of the other sciences might be eschewed
If one wished for a chance to see Beauty nude.

But I wonder what she’d have said had she lived to learn
About the physicists at CERN
Who have managed to catch the Higgs Boson
Without any clothes on?

Image: An example of simulated data modeled for the CMS particle detector on the Large Hadron Collider (LHC) at CERN. Following a collision of two protons, a Higgs boson is produced which decays into two jets of hadrons and two electrons. The lines represent the possible paths of particles produced by the proton-proton collision in the detector while the energy these particles deposit is shown in blue. This image, produced by Lucas Taylor for CERN, was published under a Creative Commons Attribution-Share Alike 3.0 Unported (CC BY-SA 3.0) license.

Thanks to Hélène Wilkinson, who in a manner of speaking put me up to it.

And thanks, as always, to Edna St. Vincent Millay.