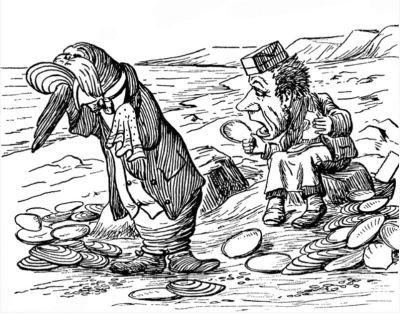 The sun glinted off the waves. It was midnight.
The moon was up. Everything was still.
The Walrus and the Carpenter were walking.

They walked for a while.

-It’s a lot of sand, the Walrus said.
-Nothing anybody can do about it, said the Carpenter.

After a while they met up with some oysters.
-Why don’t you boys come with us, the Walrus said.
The oldest one shook his head No but the young ones came along.

They walked for a while then stopped by a rock.
The Walrus wanted to talk but the oysters wanted to catch their breath first.
-Sure, said the Carpenter.
-Time for a snack anyway, said the Walrus.

-But not on us! said the oysters.
And the Walrus:
-Nice night, isn’t it?
And the Carpenter:
-Pass the bread.

-Kind of tough on the oysters, don’t you think? said the Walrus.
-It’s tough, said the Carpenter.
-Hard times, said the Walrus.
He pretended to wipe away a tear but he was really hiding the biggest oysters behind the handkerchief for himself so he could eat them.

-All right, said the Carpenter.
-Ready to head back?

By that time they had eaten all the oysters and it was still again.

See how stripping away the clutter of adjectives and adverbs strengthens the writing something fierce? Notice too how not being burdened by an archaic scheme of rhyme and meter allows me to streamline the narrative.

Image: illustration by John Tenniel for Lewis Carroll’s poem The Walrus and the Carpenter; the poem and the illustration were first published in Carroll’s book Through the Looking-Glass and What Alice Found There (1871). This illustration is in the public domain in the United States and everywhere else I’m aware of.

8 thoughts on “In Praise of Adjectives, Adverbs, Asides, Verbal Gewgaws, Blandishments, Rhyme for Rhyme’s Sake, Flummery, and the Like: A Demonstration”