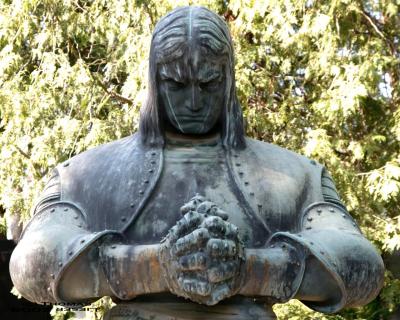 Out with you! In Christ’s name, dragon,
Out! Come from your hole and face my blade,
For I would try if dragon’s-blood be truly black.
From grieving lands beyond the sea
A hundred hundred dead cry for your death.
Hai! Out! I’ve not come such a way to face but empty air!

O erring, misinformed! This so-called empty air
Is rank with camouflage, could shelter many a dragon.
Shall I appear? Do you so earnestly seek death?
For face me, and you die — nor brightest shield, nor sharpest blade
Can alter that. Heroes have come before across the sea.
They lie about you: armor shattered, bones charred black.

A cowardly reply for one with heart so black,
A murderer whose very name befouls the air.
Come, worm: between the mountains and the sea
I stand to challenge you! Will you not try me, dragon?
Your claws against my shield; your hide against my blade.
Or do you fear to meet a test of death?

I having slain a hundred hundred men, think you one more death
Means aught to me? I come. The sea boils and the clouds turn black
Before my coming. My mouth’s a cavern, every tooth a blade;
My breath a conflagration, and my wings breed hurricanes into the air.
Man, behold a dragon.
My bones are stronger than these mountains; my blood is older than the sea.

Dragon, behold a man! The clouds and the sea
That feared your coming shall rejoice to see your death.
These mountains are not so strong as my rage, dragon,
The sun is not so hot, nor Hell as black.
Could you but hear, the wailing of my kindred dead fills the air.
Now they will be avenged. I swear this by my blade!

I shall unbind your body’s several elements; come, try your blade.
Your bones shall mingle with the earth, your thin, cold blood dilute the sea,
The smoulder of your burning dance inconsequent upon the air.
You speak of death? You have not learned to speak of death.
Death is mightier than your rage, hotter and more black.
I know this, who have killed a hundred hundred men. Death is a dragon.

The dragon claws for purchase in the sky; the man holds tight his blade,
As clouds scud low and black above a furious sea.
In one of these is death: the dragon’s stoop; the bright sword that cleaves the air.

2 thoughts on “Sestina for Hero and Dragon”