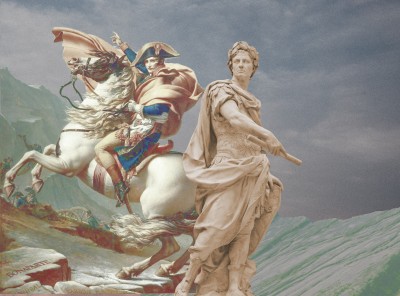 Caesar loved the Egyptian Queen
And conquered Europe to impress;
Napoleon, for Josephine,
Decided he could do no less.

The Roman styled himself divine —
His friends took pains to prove he erred;
For Russia’s lands the Frenchman pined
But he, too, found himself deterred.

Poor Julius! The Senate floor
Was where he met his Waterloo;
And Bonaparte proved just as poor,
For soon enough he met one, too.

Image: this image — yes, I know, it’s very silly — is a hodgepodge, or as you Americans might say a “collage”, composed primarily of a photograph of the Nicolas Coustou sculpture of Julius Caesar, and an image of the painting Napoleon Crossing the Alps by Jacques-Louis David. The Coustou sculpture dates from about 1696 and is currently (I am informed and believe) located in the Louvre; the photo of the sculpture has been released into the public domain by the copyright holder. The painting is one of five versions of the same scene, painted between 1801 and 1805. Other elements of the collage — the new sky background and some filler mountains — are my own and unprotected by copyright because, really?